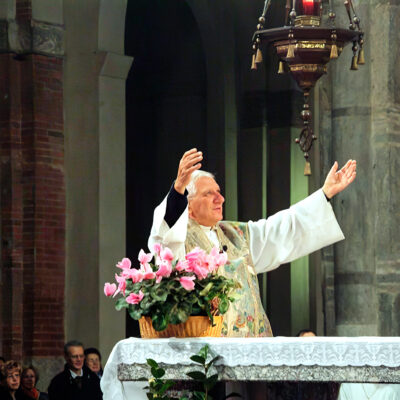 Today we remember Don Pigi Perini who died last November 19 at the age of 91 who, among other things, is credited with having given rise to the Museum of Sant’Eustorgio and the Portinari Chapel.

Don Pigi Perini, parish priest since 1977 starting from 1986, initiated a change of pastoral character that determined a strong involvement of the laity in evangelization activities through the “System of parish Evangelization Cells”. Over the course of a few years this reality led to the formation of a very active, cohesive community of faithful and above all open to new forms of involvement in parish life.
In this reality consolidated over the years and in continuous expansion, Don Pigi, with the support of parishioners and members of the community who made available particular professionalism and specific technical skills, matured the idea of ​​recovering spaces also for a museum, but the turning point decisive came later on the occasion of the “Great Jubilee of 2000” when the Presidency of the Council of Ministers activated a non-repayable loan for the enhancement of monuments and religious buildings particularly significant for the flow of visitors attracted to Italy by the anniversary.

The main need to adapt the spaces to a visit path was to free the Portinari chapel, a place that has always attracted visitors and faithful in significant numbers, from crossing the church which, especially on holidays, was busy for many hours in functions particularly intense and crowded religious.

There was also a desire to enhance the archaeological area and the evidence of the presence of Christian communities in the area occupied by the basilica since the origins of the Milanese church.
The interventions started in October 1998 ended with the opening of the museum spaces equipped with the necessary systems, in December 1999. The restoration of the Portinari Chapel and the Solarian Chapels was also completed with the decisive contribution of the Cariplo Foundation and from April 2000 the entire route is open to visitors