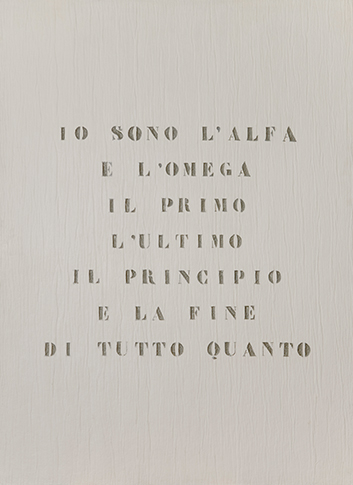 The exhibition, open until January 18, 2020, is developed in the exhibition spaces of BUILDING and in the spaces of the Sant’Eustorgio Museum, where are exhibited some of the most mystical works by Vincenzo Agnetti, such as Ritratto di Dio (1970) and Apocalisse (1974).

Divided into two sections – “Self-portraits Portraits” and “Writing”, the show focuses on a selection of the artist’s works that include not only his famous “felts”, but also many other pieces, including Identikit (1973), Autotelefonata (No) (1972) and Elisabetta d’Inghilterra (1976) – original experiments with the portrait genre – and his famous self-portrait Quando mi vidi non c’ero (1971), along with his last, unfinished work Il suonatore di fiori (1982).

The section entitled Writing therefore presents a selection of pieces by Castellani and Manzoni connected to the research of Agnetti, starting from Litografia originale (1968), which on one side has Castellani’s work and on the reverse shows a text and a diagram by Vincenzo Agnetti. Featured pieces by Piero Manzoni include his “tavole di accertamento” and “linee”, as well as works which pick up the portrait theme, including Base magica (1961), his clearly performative “living sculpture”.

The final section of the exhibition presents an extensive collection of documentary material, with texts and photographs that reveal the complexity of Agnetti’s “writing – work – writing” modus operandi, for whom the “writing – work” is something that differs from the Statements of the conceptual artists. From this point of view, a work like the self-portrait Quando mi vidi non c’ero can be viewed as a speech act, to borrow a term used by the language philosopher John Langshaw Austin, the author of How to Do Things with Words (1962). In his “felts” series Agnetti devised an experimental approach in which the writing and the art work become performance, going beyond the limiting definition of “conceptual” art.

The exhibition also includes featured performances by Italo Zuffi, created for the occasion and designed to highlight the performative aspect of Agnetti’s work, eliciting a contemporary reflection on the concepts of portrait and translation.

The exhibition was produced in collaboration with Archivio Vincenzo Agnetti, Fondazione Enrico Castellani and Fondazione Piero Manzoni, with the support of galleria Osart, Collezione La Gaia and various private collections.